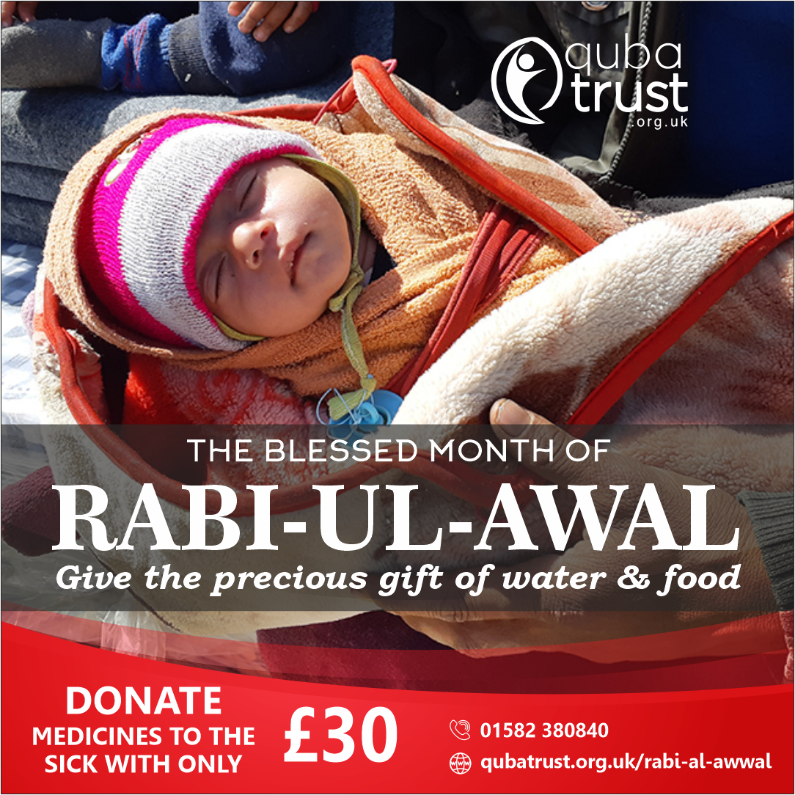 SubhanAllah, Allah (SWT) truly blessed this month by selecting it for these auspicious events! Rabi al-Awwal is definitely a month that we should pay attention to, and it is an excellent time to remind ourselves of the lessons of these events and form some good habits. With lockdown being initiated once again in the UK, which may continue during this blessed month, here are some simple things that you and your family can do to make the most of Rabi al-Awwal in the comfort of your homes.

One: Fast Sunnah days
Fasting is an excellent way to show our gratitude to Allah for His countless favors, as Allah says, ’Every good deed of Adam’s son is for him except fasting; for indeed, it is for Me. And I shall reward (the fasting person) for it’. [Bukhari] It is Sunnah to fast on Mondays: This Rabi al-Awwal, why not establish the habit of fasting on Mondays? This way, you can show your gratitude to Allah for sending the Messenger of Allah (SWT) into His creation, as well as revealing the Qur’an on this blessed day.
Two: Increase your salutations upon the Prophet (saw)
Arrange a gathering within your home with those that you live with, including children, and recite any salutations upon the Prophet Muhammad (ﷺ), in line with what is commanded in the following powerful verse: ‘Indeed, Allah and His angels send blessings upon the Prophet. O you who believe! Send blessings on him, and salute him with all respect’. [The Noble Qur’an, 33:56] 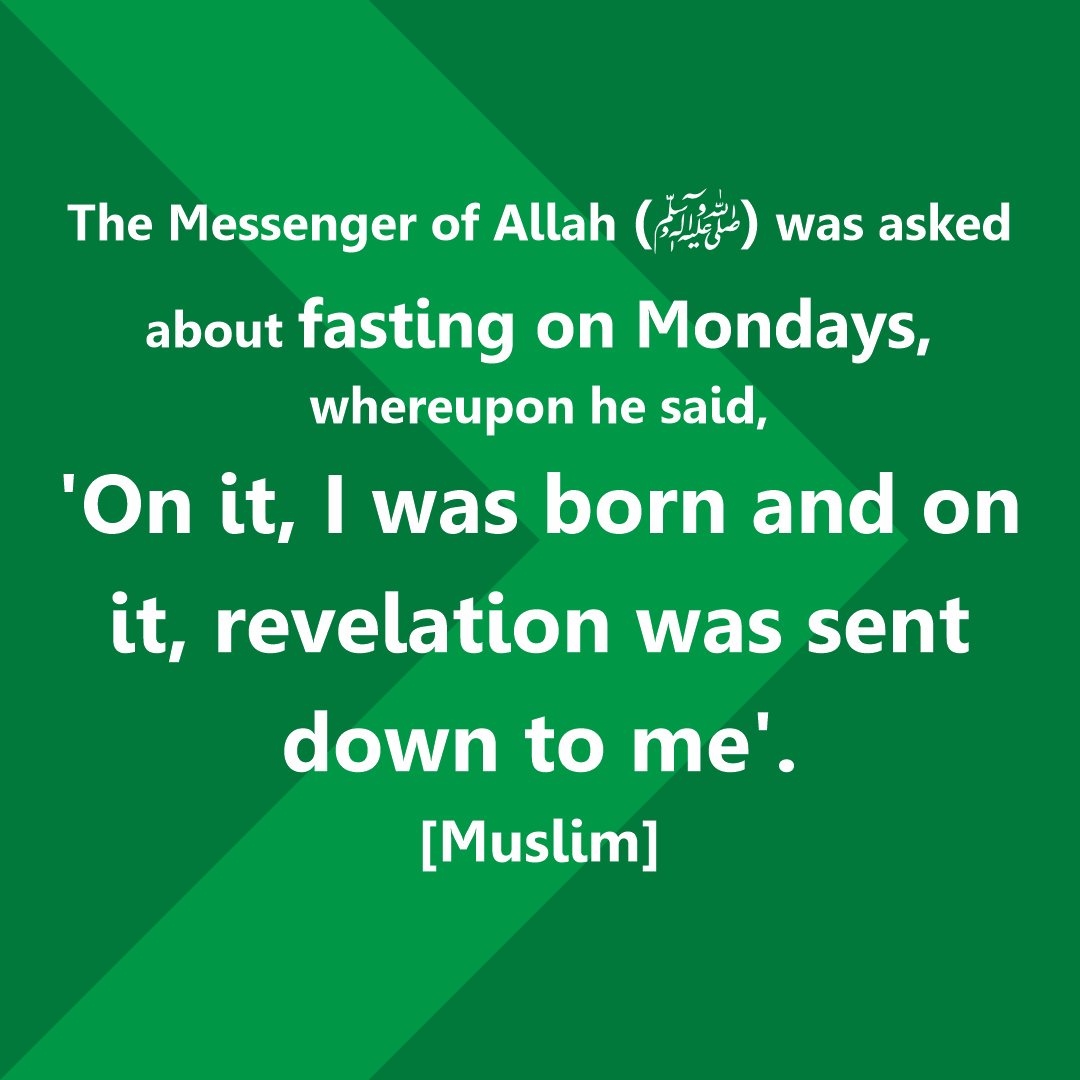 The benefit of praying in a gathering is that Allah (SWT) will be so pleased with us that He will Speak to His angels about us, In Sha’ Allah, as indicated in the following beautiful hadith: Rabi al-Awwal, the month of the Prophet’s (ﷺ) birth and passing away, is an excellent time to establish the habit of sending regular Salawaat upon him. It is especially important to teach children this habit.


Three: Give charity
Spending our wealth for the sake of Allah is also a beautiful way to not only express our gratitude towards Him but also prepare for the hereafter. Consider the case of the arch-enemy of Islam, the Prophet’s (ﷺ) uncle Abu Lahab, who receives water to drink whilst in the Hellfire every Monday for a simple reason: upon hearing the news of the Prophet’s birth, he freed his slave girl. Thus, he is given water in the same hand he used to show joy at the birth of his nephew: If even the enemy of Islam was given water for this action, imagine how much reward a believer would earn if they show their gratitude for the Prophet’s (ﷺ) birth by giving charity in Rabi al-Awwal? To earn as many blessings as possible, we have shortlisted a few projects that were beloved to the Prophet Muhammad (ﷺ) and where your donations can make a huge difference. With Quba Trust, you can automate your charity in Rabi al-Awwal for these five causes:
1) Orphans Fund: The Prophet (ﷺ) said, ‘I and the one who cares for an orphan will be together in Paradise like this, and he (ﷺ) held his two fingers together to illustrate. [Bukhari]
2) Water Fund: The Messenger of Allah (ﷺ) was asked, ‘Which charity is best?’ He replied, ‘(Providing) water’. [Abu Dawud]
3) Yemen or Syria: On numerous occasions, the Prophet (ﷺ) mentioned the virtues of the people of these blessed lands. He (saw) even made du’a for them, saying, ‘O Allah, bless us in our Yemen! O Allah, bless us in our Shaam!’ [Tirmidhi]
4) Medicines: Provide those ailing with the medicines they need all over the world
5) Where Most Needed: Or you can send your donation to where it is most needed.


Four: Learn more about the Prophet Muhammad (ﷺ)
You can only truly love someone if you know who they are. The month of Rabi al-Awwal is the perfect time to pick up a copy of the Seerah and learn about the Prophet Muhammad’s (ﷺ) life, his mannerisms, and beautiful character. You can also follow us on social media to receive snippets of inspiration from the Seerah, including descriptions of the Prophet’s (ﷺ) appearance and character. Follow @qubatrust on Facebook, Instagram, Twitter, and YouTube to get daily inspiration!


Five: Follow the Sunnah
As mentioned above, Rabi al-Awwal is the perfect time to start learning more about the Prophet Muhammad’s (ﷺ) life. But it’s also important to learn from his life and strive to emulate it! ’There has certainly been for you, in the Messenger of Allah, an excellent example for anyone whose hope is Allah and the Last Day and [who] remembers Allah much’. [The Noble Qur’an, 33:21] As mentioned above, you can start following the Sunnah by fasting on Mondays and giving generously to the needy. But you should also come up with a personal plan to follow the Holy Prophet (ﷺ) more. This Rabi al-Awwal, make a list of Prophetic actions you want to do more often. It’s okay to start small: the important thing is to build habits! Here’s a quick list to get you started:
1) Try to be kinder, in speech and actions, towards your friends and family. Ali ibn Abi Talib (RA) said of the Prophet (ﷺ), ‘He was the gentlest of people, and the kindest of them in companionship’. [Tirmidhi]
2) Pray at night more often. Ibn Umar (RA) said, ‘The Messenger of Allah (ﷺ) used to pray (voluntary prayers) at night two by two, and he would pray one Rak’ah of Witr’. [Ibn Majah]
3) Read the Qur’an with the translation, so you can follow it in your actions. Aisha (RA) said, ‘The character of the Messenger of Allah (ﷺ) was the Qur’an’. [Muslim]
4) Seek forgiveness daily. The Prophet (ﷺ) said, ‘By Allah, I ask Allah for forgiveness and I repent each day more than seventy times’. [Bukhari]
These are just a few Sunnah habits you can begin building. It’s important to look at your own strengths and weaknesses and set personal goals!


Six: Express joy
The above tips are just a few ways in which you can show your joy and gratitude towards Allah during Rabi al-Awwal. Additionally, why not download our e-message (below) and send it to your loved ones on the 12th Rabi al-Awwal? This will remind them to be grateful on this beautiful day, in light of two beautiful ayahs from the Noble Qur’an. Above all, it is important to remember to thank Allah for sending us the Prophet (ﷺ), guiding us to His Light, and making us a part of the best Ummah.